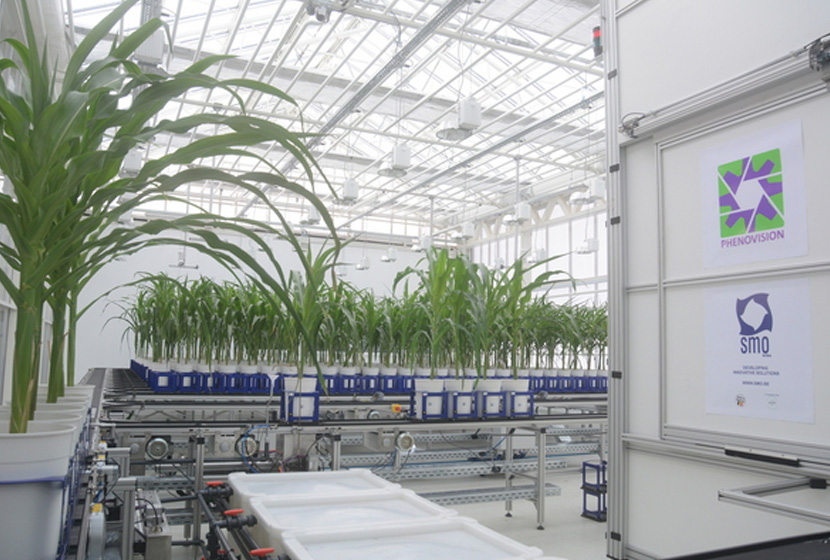 PHENOVISION is a greenhouse infrastructure for automated, high-throughput phenotyping of crops with a capacity of 392 plants.
Pots are transported in carriers on a conveyor belt system. Both pots and carriers have unique identifiers which makes it possible to treat each plant individually in transit from its position in the stationary growth area of the system to the weighing and irrigation stations and the imaging cabins. Currently, the system includes three weighing and irrigation stations with rotating platforms and the possibility to apply water and up to three different solutions. Soil water or nutrient deficit conditions can thus be imposed on plants.
The imaging cabins are enclosed areas with camera-adapted lighting conditions and a lift with rotating platform. At present, three camera systems are available in the cabins. The first one consists of RGB cameras in a multi-view imaging setup for the three-dimensional reconstruction of plants and the measurement of growth-related phenotypic traits. Plant physiology-related traits are measured or approximated by exploring a larger stretch of the electromagnetic spectrum. A thermal infrared camera captures energy emitted at 8-13 µm. The corresponding contextual plant and leaf temperature is used as a proxy for plant water use behaviour. A state-of-the-art hyperspectral imaging system, consisting of a visible to near-infrared camera (VNIR, 400-1000 nm) and a short-wave infrared camera (SWIR, 1000-2500 nm), constitutes a novel tool for close-range sensing of plant physiological traits based on reflectance spectra captured on the plant and individual leaf level. Smart features of the infrastructure include a 'handling zone' where the system can bring and retrieve a requested number of plants belonging for example to a certain genotype or treatment. As the handling zone is accessible by users of the system, it allows for visual observations of plants or manual actions on plants, such as the measurement of specific plant traits or the extraction of plant parts for molecular or biochemical analyses. A second smart feature of the system is the possibility to load external plants into the system, for example plants grown in another greenhouse compartment or growth chamber, in order to have them imaged and/or treated at the weighing and irrigations stations.
Environmental parameters including air temperature, relative humidity and light intensity (photosynthetically active radiation), are continuously monitored in the greenhouse to direct the greenhouse heating, ventilation, humidification and lighting system, but also to support genotype-environment interaction studies in greenhouse conditions.

In the Systems Biology of Yield group, the phenotyping platform is mainly used to study the effects of mild drought and nutrient deficit on growth- and physiology-related traits in maize. Maize can perform its vegetative development on the platform, while for reproductive growth and the measurement of final growth and performance traits, plants are transferred to the neighbouring greenhouse compartment under similar environmental conditions.